17,802,181 is the number of views of heartwarming P&G commercial “Pick Them Back Up” on YouTube. This commercial shows us how athletes are doing their best to get a chance to participate in the Sochi Winter Olympic Games and moms supporting their children in every way to achieve their dreams. P&G`s new commercial strategy started in 2012 with the London summer olympic games. “Best Job” is a Emmy Award winner commercial, which also shows how moms are helping their children to achieve something great, something big by pushing their back and picking them up again and again. It`s sentimental scenes and the message “for teaching us that falling only makes us stronger” would definitely make you cry.

With #thankyoumom and @thankyoumom P&G tweets the results of the #sochi2014 USA team, advertises their products, and communicates with it`s customers. It will help P&G to attract more and more people on the social media.

In addition to the Family Home, P&G is giving $1,000 Visa gift cards to each of the 357 Olympic and Paralympic athletes’ moms, intended to help them travel to Sochi. Great company!

Free food is given at the Olympic Village in Sochi, so why wouldn’t athletes enjoy the free food that is offered? Torin Yater-Wallace, U.S. freeskiier, was found taking full advantage with McDonalds, who has been an Olympic sponsor for decades. 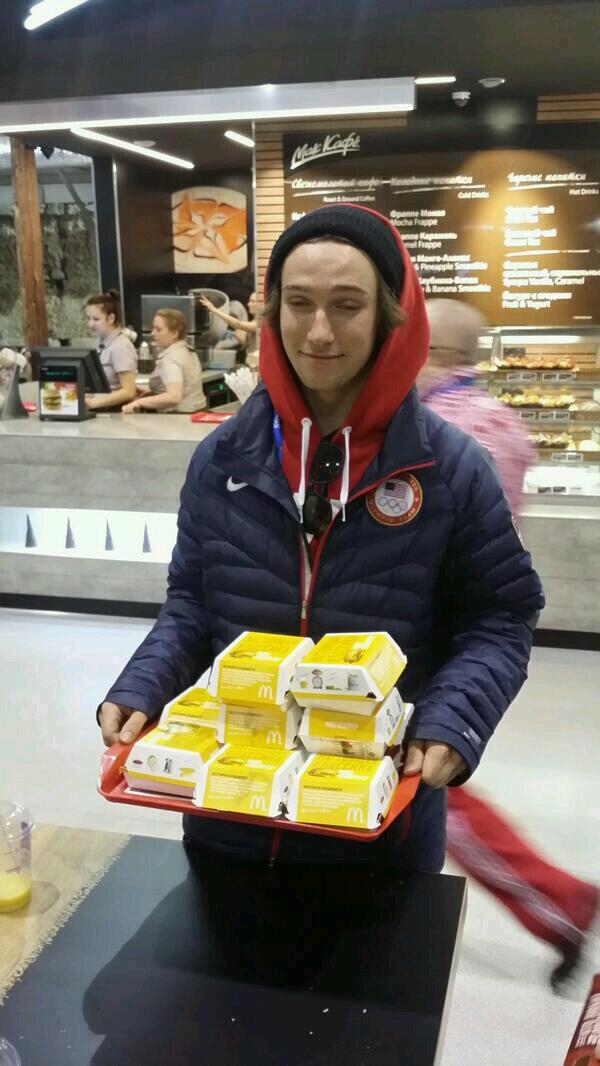 He tweeted Wednesday February 12th, “Luh me mac D’s who in the mountain village needs some, I’m about to be the supplier,” explaining that all of the food was for his friends. Accusations came out that Yater-Wallace was stoned in the picture and tweets went flying.  Even bad publicity is giving McDonald’s recognition and advertising.

Steven Holcomb, U.S. bobsledder, tweeted Wednesday “No McDonald’s in the Mountain Village, but the cheeseburger fairy still found us,” with the picture shown below.

LGTB was a big issue among the Sochi games. McDonald’s, along with many other supporting companies, are trying to help the issue. They tweeted this logo showing their support for equal relationships and how anyone can enjoy McDonalds.

McDonalds is also trying to get everyone involved in the winning games moments by their logo, “Let’s all celebrate with a bite.”  As the gold medal winners bite their medal, we should bite nuggets as if living in the moment with them.

McDonalds overall is reaching out to all audiences with different styles of promotions, showing that everyone can have McDonalds and be a part of the Sochi 2014 games.They are on their game reacting with a different campaign for every issue and utilizing social media to the fullest.  The real question is does all of the publicity actually gives McDonalds a profit?

One of the most anticipated parts of any Olympic Games, Summer or Winter, is the Opening Ceremony. It is a time when viewers can see people of different nations all across the globe come together as one, promoting unity, spirit, and national pride. For me, the most exciting part of the Opening Ceremony is the Parade of Nations.

It’s always interesting to see the number of athletes each nation has, their reactions when they enter the stadium, and the unique fashion choices for the athletes’ outfits. With the growing number of users on social networking sites, conversation and critique of each country’s outfit choices is so easy to tap into.

Although I was enthralled by many other components of Sochi’s Opening Ceremony, I really got into the discussion and expressing my own opinion about the fashion choices made by the different countries. I could really and truly go on about this subject, because of my own personal interests, but I’ll keep my discussion focused on the more major fashion decisions.

Because of the massive time difference between the United States and Sochi, the Opening Ceremony was prerecorded several hours in advance of its 7:30 p.m. EST showing on NBC. With that, some discussion about the event had already begun—starting with the design for Team USA’s outfits, designed by Ralph Lauren.

Own a piece of American history with the Limited-Edition #TeamUSA Opening Ceremony Cardigan http://t.co/8HsNbJfg3e pic.twitter.com/8yCigDSKoZ

In contrast to his 2012 outfits that were manufactured in China, Ralph Lauren made sure to have 2014’s outfits made in the USA, which pleased many. However, the patchwork-style blazers received mixed reviews from the online community.

As you can see, some users found the “ugly Christmas sweater” look to be patriotic and unique, but another faction of online users was not so pleased with them, including myself. Typically, I find Ralph Lauren’s pieces to be tasteful and stylish, but that was not at all the case with the jackets at Sochi’s Opening Ceremony. I, and many other users, found them to look tacky, hideous, and too busy.

Showing national pride through your team’s outfits is obviously an important part of the Parade of Nations, but Team USA really dropped the ball on this one. I would’ve preferred a much more subtle look with a simpler design and perhaps some red-white-and-blue accessory pieces, such as hats and scarves.

If you missed it, uniforms of German Olympic team are the giant happy "F*ck you!" Putin and his homophobes deserve. pic.twitter.com/gGgsq5XNnA

Another nation whose outfit choices caused some conversation was Germany, whose brightly colored coats and hats gave off an unintentional political message. One of the well-known issues regarding the 2014 Winter Olympics is Russia’s strong stance against homosexuality and its distribution of anti-gay propaganda throughout the country.

At first glance of the outfits and keeping in mind the design and colors of the gay pride flag, one might think Germany and designer Willy Bogner wanted to show their support for openly homosexual athletes as well as making a statement that they disagree with Russia’s views on homosexuality. However, Germany affirmed that they actually did not have any motive related to this for their outfit choices, but many online users felt the country said this in order to avoid backlash from Sochi and the Russian government.

Although Teams USA and Germany seemed to cause the majority of the buzz, I thought I would share a few of my favorites from the other countries, for those who might have missed part of the Parade of Nations.

ValentinaShevchenko of Ukraine carries the national flag as she leads the team during the opening ceremony #Sochi2014 pic.twitter.com/tMuJFTHaBY

Life is a Beautiful Sport. LACOSTE is the proud official outfitter of the French Olympic team! #Sochi2014 #TeamFrance pic.twitter.com/Um5eC1spZG

Lacoste did a GREAT job on Team France’s uniforms. Very simple, very French, and very stylish. If only Ralph Lauren could have followed suit with something closer to this.

Of course, I need to take a moment to mention the host country, Team Russia. I really liked the long, puffy jackets with the fur lining worn by the women, and I enjoyed how each athlete from Russia wore a different colored jacket–either red, white, or blue.

Looking at some of the tweets about both Team USA’s and Team Germany’s outfit choices, amongst many other fashion-related tweets that were posted during the four-hour Opening Ceremony at Sochi, we can see how social media has allowed for members of the online community to interact, chat, and discuss these topics at a much more rapid rate than they would have in the days before Facebook, Twitter, and other social networking capabilities.

That being stated, this is exemplifying how Twitter is truly a “social streaming” type of network which allows for numerous non-linear conversations to occur at the same time about the same topic. With first impressions and appearance being such a big impact in numerous situations, what were some of your thoughts about the outfits at Sochi 2014’s Opening Ceremony and the surrounding discussion?