Social media is a great way of communicating to large groups and varieties of people as well as spreading information. An excellent example of how social media is utilized in such ways is the Olympics. Throughout the 2014 Winter Olympics social media used multiple platforms to advertise and keep people updated on the Olympics. YouTube, Twitter and Facebook were some of the more popular ways that people followed the Winter Games. YouTube is full of videos with broadcasts, specific clips, and slide shows/pictures from the Olympics. These videos make it possible to see things that could have been missed and provide general overviews. Twitter also has various accounts that keep people updated as well as promote the players and the games. By following the Olympics on twitter that person is constantly aware of what is happening just by checking his/her news feed.   Facebook has an entire page (and several other) dedicated to the Olympics where specific information about the Olympics is included. Information such as the dates of the Olympics, what rank a county is and so on can be found on this page. The goal of those who run these platforms is to get as many people involved in watching and following the Olympics as possible. They want to spread awareness and popularity of the Olympics. They also promote the athletes involved and attempt to create fans. The most important aspect of these social media platforms is how easy they make it for people to have access. There are an extremely high number of social media users. Events such as the Olympics are able to advertise so well through social media because it is simple to reach them. Most people do not want to go through a difficult process in order to keep up with the Olympics. I believe that social media is a big part of the Olympics. It is difficult to keep track of things with how busy we become but social media keeps it easy and is so popular it almost forces us be aware. Would the Olympics be as popular/well known if it wasn’t for social media? 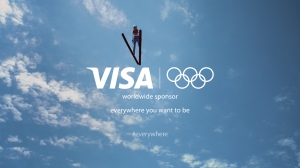 Visa took home gold when it came to advertising during the Sochi Olympics.  Visa became the first sponsor to use paid search to drive visitors to its Tumblr account.  The ads have appeared on both Google and the Yahoo Bing Network.  According to YouGov BrandIndex. Visa was consistently included in Twitter’s daily “most-shared Olympic images.”  Visa had 15 images featured, which accounted for more than 50,000 retweets and 75,000 favorites.  It’s no wonder Visa took gold when it came to advertising.

Visa has been a sponsor of the Olympic Movement for more than 27 years, according to Kevin Burke, Visa Chief Marketing Officer.  According to Burke “For the Sochi Olympic Winter Games, we used that platform to launch and showcase our new brand repositioning, ‘Everywhere You Want to Be,'” he says. “(The Campaign) ties together our proud history with the Olympic Games to the endless possibilities our brand brings for consumers, merchants, financial institutions, governments and others — all over the world.”

Visa created Team Visa Mosaic that allowed fans to participate in congratulating Meryl Davis and Charlie White on their gold medal win.  Fans could find their avatar within the image of the congratulatory message for the Olympic stars.  Visa sent out tweets to those whose avatars were selected.  The ones selected also received digital autographs from Meryl Davis and Charlie White. 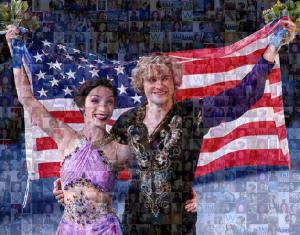 Visa worked well in advertising during the two week Olympic Games at Sochi.  They tried to connect people to Olympic athletes and make people feel like they were part of the Olympic experience.  They tried connecting those who had no interest in the Olympics, to follow based on eye catching pictures and ads.  I feel they knocked it out of the park and really left us with images that will last a lifetime.  Did Visa take you everywhere you wanted to be during the Olympic games? 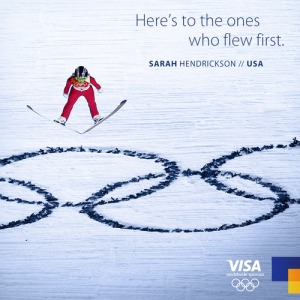 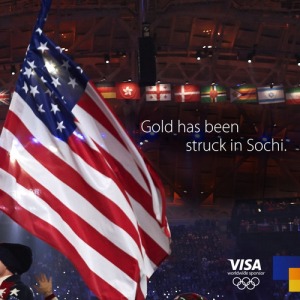 A lot of the social media buzz during the 2014 Sochi Winter Olympics surrounded LGBT issues and Russia’s anti-gay law. Sochi sponsor Coca-Cola was unable to escape that buzz.

Russia has an anti-gay law that bans pro-gay “propaganda” that could be accessible to minors. Critics say it is so restrictive that it forbids almost any public expression of support for gay rights.

Coca-Cola launched a social media campaign allowing users to type in their name or a message through their website and see it printed on a virtual Coca-Cola can, which they can then share with friends and followers on social media networks. Coca-Cola faced a big problem when users started to notice when they typed the word “gay,” Coca-Cola responded with, “Oops. Let’s pretend you didn’t just type that.” However, if users were to type the word “straight,” the website allowed them to.

An organization called Queer Nation NY re-edited Coca-Cola’s famous 1971 commercial from singers on a hilltop called “I’d Like to Buy the World a Coke” to scenes of protesters in Russia being attacked  for publicly expressing gay rights.

Coca-Cola responded by uploading the commercial to Facebook and adding the comment, “Cheers to the fact that a song can top the charts and be above love, equality and happiness. #AmericaIsBeautiful.” Coca-Cola’s response played on their Super Bowl campaign, America is Beautiful and Coke is for everyone and continued with #AmericaIsBeautiful throughout the 2014 Sochi Winter Olympic Games. 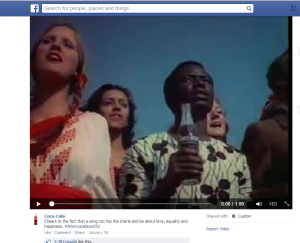 Coca-Cola took a big hit with their social media campaign as did other big sponsors like McDonald’s and Visa, but I think Coca-Cola responded well to their crisis by applying their super bowl message to the Sochi Winter Olympics.

What do you think of Coca-Cola’s Sochi social media campaign and how they responded to the crisis?

Visa has been a sponsor of the Olympic Games for more than 27 years and currently stands as the only payment card accepted at the Sochi 2014 Olympic Winter Games.

Visa’s global Olympic marketing campaign celebrates the achievements of the Olympic athletes as a means to inspire consumers to pursue their own dreams. Included in their campaign is the utilization of popular social media platforms recognized globally.  Fans are encouraged to visit Facebook (www.facebook.com/visa) and Twitter (@visa) and share what inspires them.

Visa’s objective in promoting the successful athleticism of the Olympic Games and encouraging others to share their stories helps promote their brand in a positive and uplifting approach.  In addition, their campaign slogan “Everywhere you want to be” sheds light on their inclusive brand that is recognized globally.

Visa’s Olympics commercial, “Everywhere” portrays the dedication and success of the Olympic athletes and inspires viewers to achieve their dreams.

For freeskier David Wise, participating in the Olympic Games wasn’t his only life-long dream.  In a recent tweet, he indicated that #TeamVisa allowed him to cross “item #43” off of his bucket list, with their “Everywhere” commercial.

Visa’s marketing campaign not only celebrates the astounding achievements of the Olympic athletes, but it also gives confidence to fans and empowers them to achieve their most difficult goals, whatever they may be.  After viewing Visa’s Twitter page and seeing the ad commercials, it inspired me to achieve anything I set my mind to and in return allowed me to trust Visa as a brand.

What does Visa inspire you to do?

17,802,181 is the number of views of heartwarming P&G commercial “Pick Them Back Up” on YouTube. This commercial shows us how athletes are doing their best to get a chance to participate in the Sochi Winter Olympic Games and moms supporting their children in every way to achieve their dreams. P&G`s new commercial strategy started in 2012 with the London summer olympic games. “Best Job” is a Emmy Award winner commercial, which also shows how moms are helping their children to achieve something great, something big by pushing their back and picking them up again and again. It`s sentimental scenes and the message “for teaching us that falling only makes us stronger” would definitely make you cry.

With #thankyoumom and @thankyoumom P&G tweets the results of the #sochi2014 USA team, advertises their products, and communicates with it`s customers. It will help P&G to attract more and more people on the social media.

In addition to the Family Home, P&G is giving $1,000 Visa gift cards to each of the 357 Olympic and Paralympic athletes’ moms, intended to help them travel to Sochi. Great company!

Although no one knows the exact cost, one can only imagine the hefty price tag associated with being listed as one of the United States’ 23 domestic sponsors for the 2014 Winter Olympics in Sochi. For these 23 companies, the lofty price tag is perceived to be well worth the marketing potential that accompanies the prestigious Olympic Games.

However, what if your brand discovered that your products, the focus of your campaign, were not permitted into Russia? And how would this impact your expected ROI? This marketer’s nightmare has proved to be reality for Chobani and its “Naturally Powering Team USA” campaign.

Chobani’s Olympic campaign features several of Team USA’s finest and their Chobani yogurt favorites. The campaign, which features the tagline “It’s one thing to sponsor them, it’s another to be in their fridge,” has utilized celebrity endorsement of favorite flavors and recipes to promote the natural greek yogurt.  However, after the shipment of 5,000 single-serve yogurts was banned from passing through Russian customs and left to be stored in Newark, NJ, the greek yogurt company has had to quickly restructure the focus of their campaign to maximize both awareness and profit.

Although this snag has prevented the product from powering the athletes through their competitions, Chobani has effectively utilized their Facebook, Twitter, and YouTube accounts to highlight the products’ integral role in the athletes’ training, emphasizing the hashtag #howmatters.

The brand has capitalized on this hindrance, turning problem into opportunity, demonstrating the strength of their social media presence. With over 891,000 Facebook likes, 74,700 followers on Twitter, and 4,312 YouTube subscribers, Chobani has exhibited the power of social media as an effective supplement to traditional and digital marketing efforts.