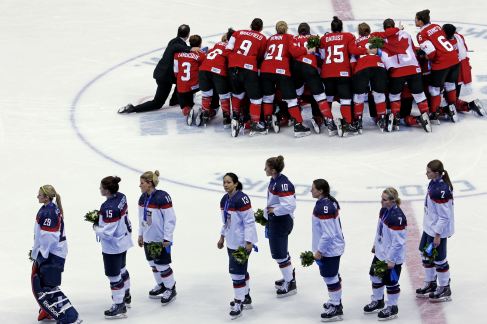 On February 20th the United States took on Canada in the women’s hockey gold medal game, and the following day the same two countries faced off in the men’s semi-final. Both the U.S. and Canada are very passionate about hockey, but it is thought that the men’s game is more cared about than the women’s. According to an analysis done on the social media management tool HootSuite, that may not be the case.

More people took to social media to mention the women’s gold medal game than did for the men’s semi-final game between the U.S. and Canada. (Canada won both games) The women’s game may have been a little bit more exciting, as it was ended in overtime on a goal by Canada’s Marie-Phillip Poulin. This game was mentioned over 121,000 times on social media, while the men’s game which ended in a 1-0 Canadian win, was mentioned 109,000 times.

So what we can take form this analysis is that the women’s game definitely generated more buzz via social media, but at the end of the day the well-known popular male hockey players still get mentioned more than the women athletes. So just because the women’s hockey game outdid the men’s on social media, doesn’t necessarily mean it is more popular than men’s hockey. It is very eye-opening and surprising to see that the women’s game did in fact generate more buzz than the men’s game, and it will be interesting to see in future Olympic Games if this continues to be the case.