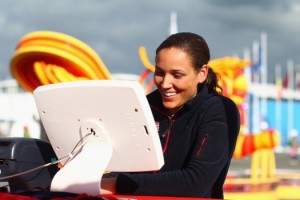 If there is one person you should follow during the summer or winter Olympics it is definitely the star hurdler turned bobsled competitor Lolo Jones. Jones utilizes social media better than any athlete I have seen so far and she uses it across multiple platforms.

Through the Sochi games alone Jones used Twitter, Facebook, Vine and Instagram throughout the two weeks in Russia with her activity being lower during days she had to compete. Her social media antics are typically light hearted and fun to view and were especially refreshing to see while there were so many negative stories coming out of Russia during the 2014 Winter Olympics.

Jones not only did well with posting her on her own but she also replied to and retweeted people from back home that were wishing her luck which fans enjoy to see because it makes a world class athlete such as Jones seem more relatable and down to earth which you do not always get out of people with fame. The only way keeping an eye on her social media presence could have been more entertaining is if her team would have medalled along side the silver medal team from the United States, Elana Meyers and local Olympic athlete Lauryn Williams.

Below are some examples of her posts from Sochi that I found entertaining. I’m sure there will be more to see from her when she is not too busy training to get back in shape for the 2016 Summer Olympics.