British speed skater Elise Christie became the target of mean, abusive, and even threatening messages on Twitter after the three-way crash she caused during the 500m short track final last Thursday. She deactivated her Twitter account the next day. 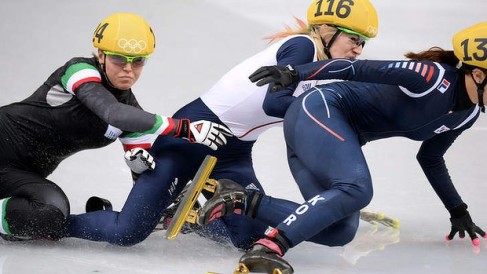 The abusive messages were reportedly coming from South Korean fans who were upset that her crash had involved Korean speed skater Park Seung-Hi, thereby ruining Seung-Hi’s chances for gold.

The Twitter abuse has really affected Christie’s mindset and her performance. Two days after the crash and the onset of the abuse, she was disqualified in the 1500m heats on a technicality. She still has the 1000m, her preferred event, but she admitted in an interview after the 1500m, “I’d like to say that I’m looking forward to the 1000m, but I’m struggling.”

Today, she did manage to qualify for the 1000m quarter-finals, despite admitting that she almost pulled out of the Olympics all together: “I thought, ‘I don’t want to do this,’ but I would never pull out really because I always have that grit in me that keeps carrying on. … But I was feeling pretty low, the lowest I have felt in my career.”

Christie’s saving grace was the sudden influx of support from British fans as well as the speed-skating community as a whole, including the Koreans. Crashes are common in short-track speed skating, and the skaters all know this. Christie and Seung-Hi are on good terms, and Seung-Hi reportedly hugged her after the crash and told the media she did not blame her.

In response to this event, the British Olympic Association has called for more action on the part of social media service providers to protect users from abuse. Darryl Seibel, the BOA director of communications, says: “I do believe service providers must be a part of the solution and probably could do more to help keep these things from happening. … They provide the portal. They have full sight of what’s going on.”

Attacks like this happen to professional and famous athletes all the time, but they manage to handle it. But Olympians such as Christie, mostly unknown to the world, are hardly different from you or I. How would you handle thousands of mean, threatening tweets suddenly directed at you? Probably not very well. Christie’s perseverance in the face of this can be an inspiration to all cyber bullying victims.